150 miles from LA, there’s a bright blue patch in the desert. Twice as salty as the ocean, the Salton Sea encompasses roughly 325 square miles – though that number fluctuates drastically.

It’s this fluctuation that has been its pitfall. The Salton Sea was formed very accidentally in the early 1900s; it’s the result of an irrigation accident where the Colorado River burst and flowed into a dry (and very salty) lake bed for 2 years.

These days, the sea keeps getting saltier and saltier – the scant influx of water is consistently less than what’s evaporating. Thanks to California’s dry, sunny desert climate, the shoreline is almost constantly receding, exposing a dusty lakebed littered with dead fish, garbage, broken seashell beaches; a stark contrast to the cobalt blue waters of the Salton Sea.

But it wasn’t always so bad. In the 1950’s, the Salton Sea was a productive fishery, and also a popular tourist spot in the ’50s – with resorts, beachfront homes, speed boat racing and water skiing. But the salinity of the lake and the heavy agriculture of Southern California slowly destroyed the ecosystem, eventually deeming the Salton Sea unsafe. 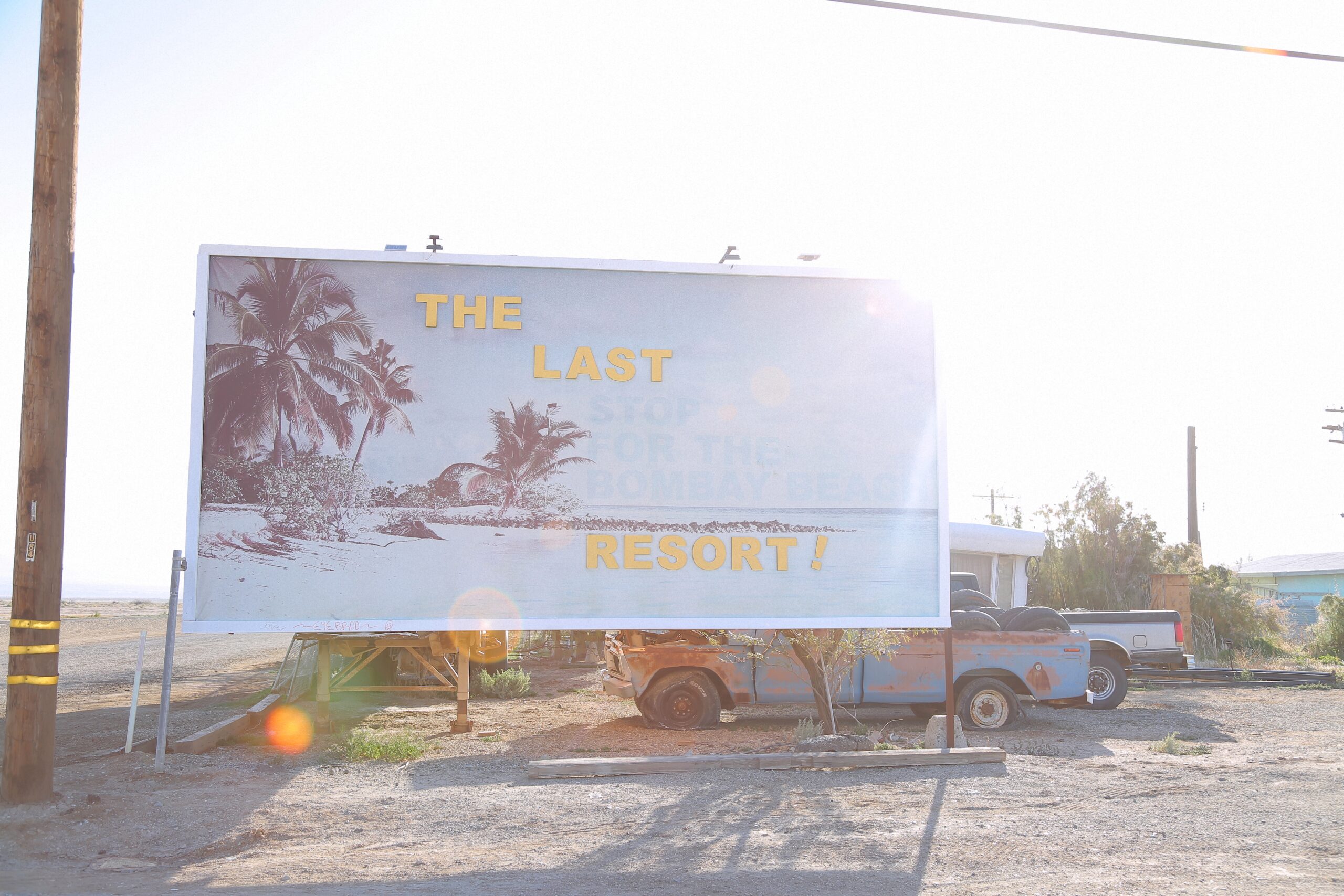 It’s a sight to behold – and many people do! The area attracts photographers and adventure seekers from all over the place. Most people begin in Bombay Beach, in search of hotel ruins and sun-faded vintage billboards from Salton Sea’s heyday. Shells of homes dot the landscape, many of them covered in colorful graffiti and art.

To explore Bombay Beach, drive or walk through the town, then find somewhere to park to head to the beach. Here you’ll find a lonely swing set out in the water; this is “The Water Ain’t That Bad, It’s Just Salty” by Chris “Ssippi” Wessman, and Damon James Duke. Closeby, you’ll find “The only other thing is nothing” by Michael Daniel Birnberg—a metal sign that says exactly that. There’s lots of other art stuff to take in on the beach, from large-scale sculpture to more colorful street art.

After you’ve had your fill, grab a beer and a bite at the Ski Inn — the lowest elevation bar in the western hemisphere — then head to the next bizarre destination, Salvation Mountain.

Salvation Mountain is a hillside art installation/environment created by Leonard Knight (1931–2014). The profoundly strange but beautiful monument is larger than life; large manmade hills, cave-like rooms and other spaces combine to create an immersive environment, made complete with Bible verses and scripture painted in the cheeriest color palette imaginable.

Last, venture beyond Salvation Mountain to East Jesus and Slab City. These neighboring desert communities are in the literal middle of nowhere, and that’s exactly why residents live there. From all different walks of life, all the residents have one thing in common: they want to be totally off-grid. 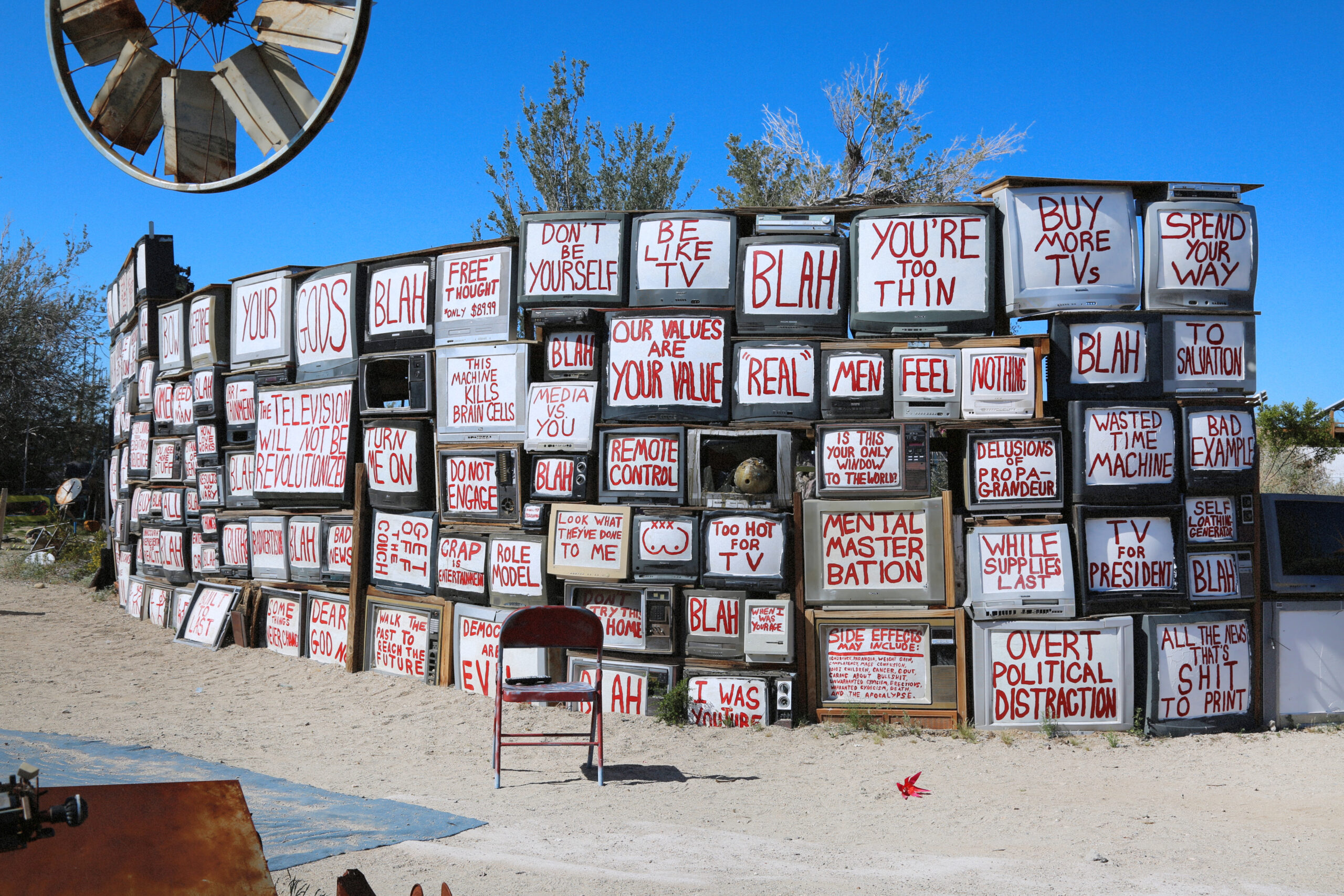 East Jesus is the more tourist-friendly of the two; you can park your car and walk around a (donation run) art museum that perfectly captures the vibe of the area. Everything you see here is made from recycled trash and objects; the small artist community is completely self-contained, and even runs entirely on solar power.

Down the road in Slab City, things are a bit more unruly – actually, it’s been dubbed by its residents as “the last free place,” which basically means no rent and no rules. This desert community (who are technically squatters) live here for free; many residents are seasonal snowbirds living in RVs, but some are not, creating homes from tents, lean-tos or even broken down school buses. In an otherwise bleak landscape (and during pandemic, certainly a bleak time), these desert communities around the Salton Sea are proof that human resilience and creativity will always remain. 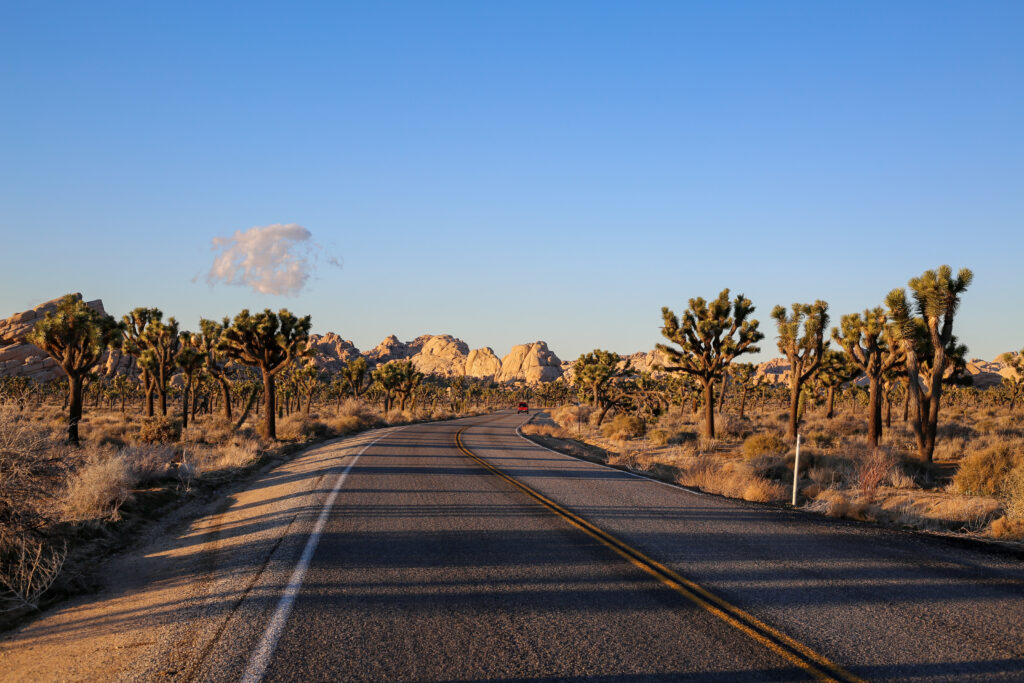 A Guide to Joshua Tree, CA

If you’re looking for some desert seclusion with a mix of accessible amenities, make the 130 mile journey east to Joshua Tree National Park. The majority of services for those visiting the park are found in the nearby communities of Joshua Tree, Yucca Valley, or Twentynine Palms. 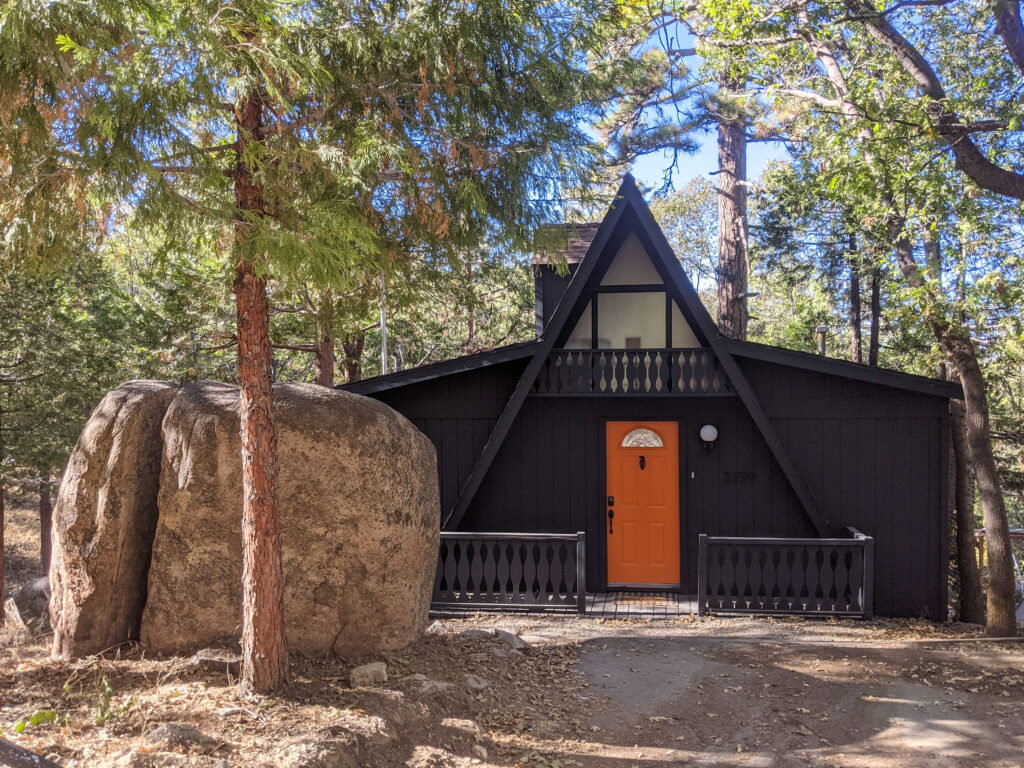 A Guide to Lake Arrowhead, CA

When we think of alpine luxury, Lake Arrowhead immediately comes to mind. Drive a couple hours east of Los Angeles and find yourself up in the San Bernardino Mountains, where trails and forest surround the picturesque lake complete with a charming village town. 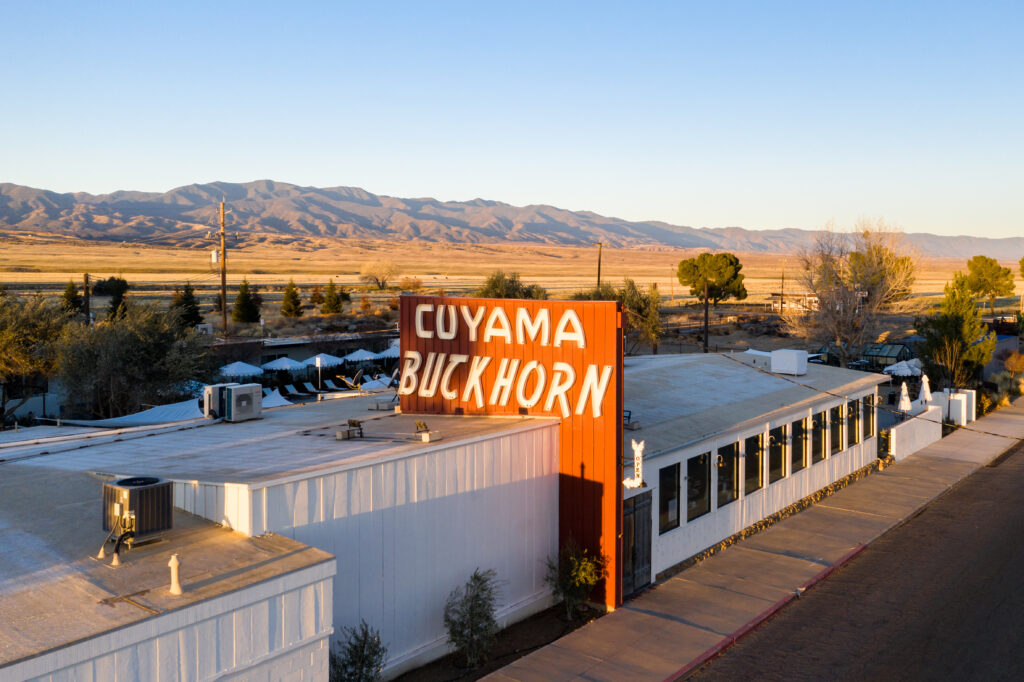 A Guide to New Cuyama, CA 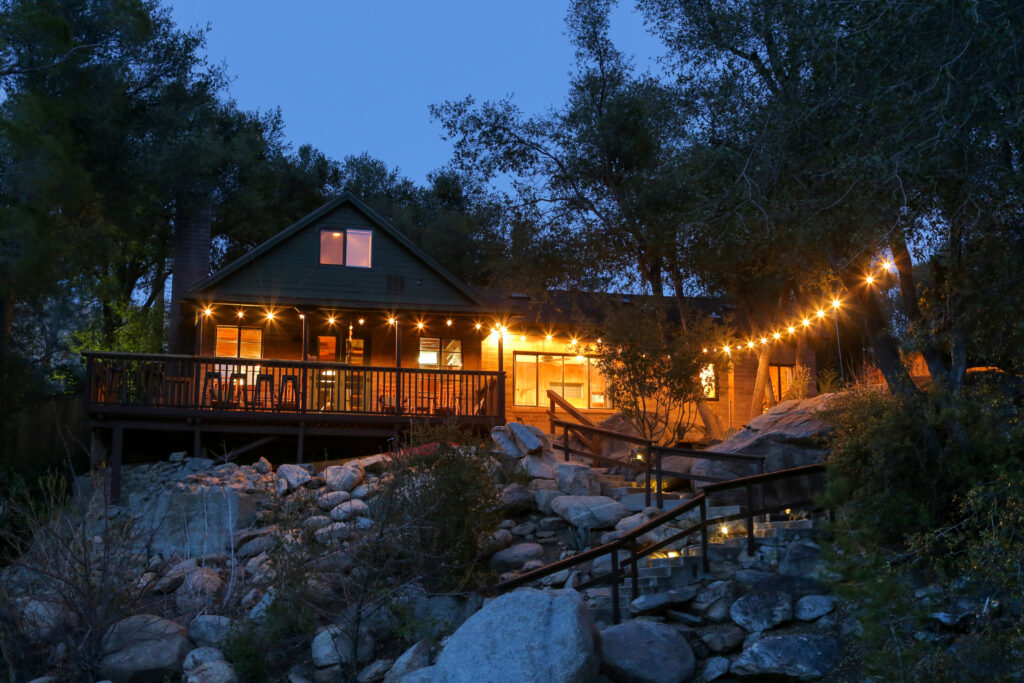 Kern River House’s four Kernville cabins are exactly the type of rental we love: where guests can check-in and “check out,” never having to leave. Part of our Escape LA Guide to Kernville.